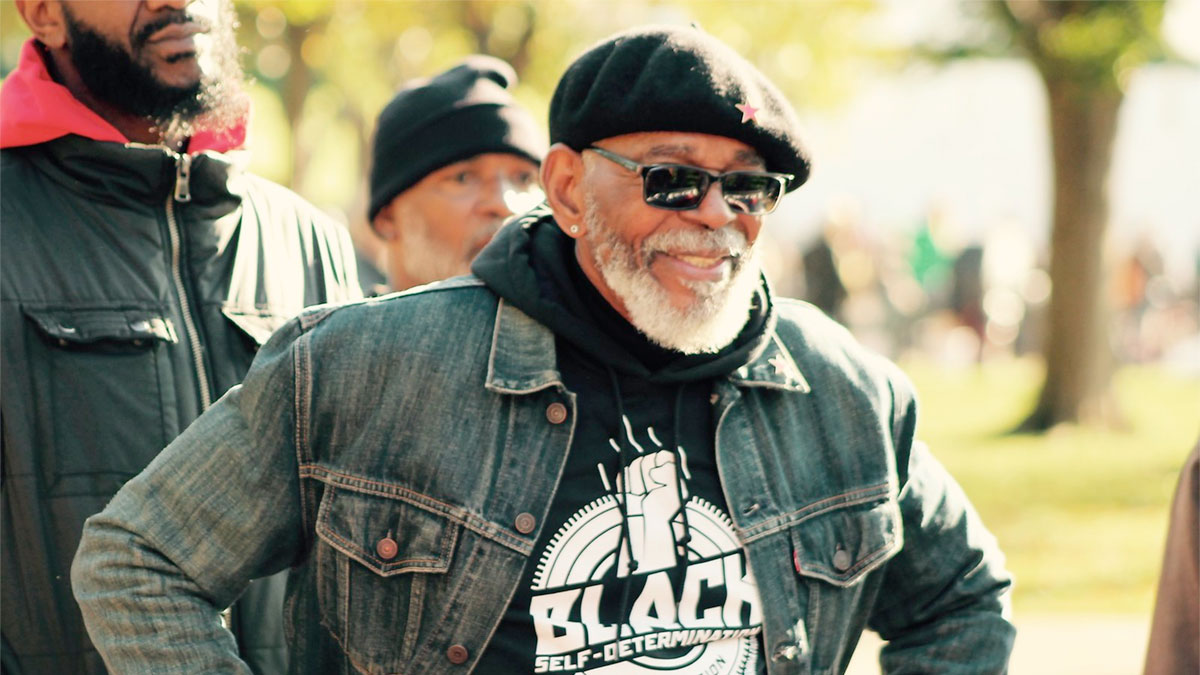 81 years ago, Chairman Omali Yeshitela was born as Joseph Waller on October 9, 1941 in St. Petersburg, FL where he grew up in an African community on the city’s south side.

Chairman Omali grew up during a time where resistance to colonial oppression was heating up throughout the world. There were many different incidents that pushed him into the Black Power Movement–from first-hand accounts and witnessing of the treatment and conditions of black people, to his time in the U.S. military, where he was exposed to the reality of the U.S. as a brutal imperialist world power. He was incensed by the images of Africans being beaten or killed in pursuit of basic rights. This set within him his thirst for freedom.

With the advent of the Civil Rights Era in the 1950s, Chairman Omali became involved in the Civil Rights Movement. He joined the Student Non-Violent Coordinating Committee (SNCC) and led the first membership-based SNCC organization in the state of Florida.

During a SNCC-led demonstration at St. Petersburg’s city hall on December 29, 1966, Chairman Omali tore down George Snow Hill’s “Picnicking at the Pass-a-Grille–” a massive, white nationalist mural that caricatured Africans with black-face minstrelsy.

Tearing down that mural was an act of anti-colonial resistance that resulted in him being arrested and sentenced to five years in prison. This was the first bold act that kicked off the struggle for Black Power, with the Black Panther Party storming the California state capitol building shortly after.

His anti-colonial organizing efforts during the Black Power Movement of the 1960s resulted in constant jailings and threats of colonial State violence. While Chairman Omali was in prison he founded the Junta of Militant Organizations (JOMO) in 1968. The organization’s name reflected its identification with the Kenya Land and Freedom Army that Dedan Kimathi led in Kenya during the Mau Mau rebellion against British colonialism–just as the adoption of “uhuru” as the Swahili word for freedom and independence as a slogan and demand that was popularized by it bespoke the freedom JOMO was committed. JOMO’s name was also Swahili for “Burning Spear,” which became the name of its official publication: The Burning Spear newspaper.

After emerging in the wake of the assassination of Martin Luther King Jr., JOMO became a leading anti-colonialist organization of the African Liberation Movement along with the Black Panther Party until the African Revolution was defeated by the U.S. government initiated counterinsurgency of COINTELPRO, which unleashed a campaign of repression against it. This war led to the assassination of Malcolm X, Martin Luther King Jr., Fred Hampton and scores of members of the Black Panther Party and the Black Liberation Army and the imprisonment of Huey P. Newton, Geronimo Ji Jaga Pratt, Assata Shakur and many others.

With the defeat of the African Revolution, Chairman didn’t surrender the struggle for African freedom. On African Liberation Day in 1972, Chairman Omali came together with Black Rights Fighter leader Lawrence Mann and the Gainesville Black Study Group leader, Katura Carey and formed the African People’s Socialist Party, with the objective to complete the Black Revolution of the 1960s. He founded it to be the vanguard party that would continue the African Revolution and lead the protracted struggle against colonialism in the quest for national liberation and self-determination.

As the leader of the APSP, Chairman Omali posited colonialism as the main problem confronting Africans in America and differentiated colonialism from racism by identifying racism as the ideology of colonialism which justifies tyranny and oppression and obscures the colonial question. He also provided a revolutionary critique of colonialism that revealed it as the foundation of the modern world and the world economy and world order; this is the mode of production through which the West acquired untold riches and wealth by robbing and raping Africa and pillaging and plundering Asia and the Americas and continues to enrich itself by stealing the resources and wealth of Africa, Asia and the Americas through the expropriation of colonialism and the exploitation of its peoples by capitalism.

His analysis of colonialism gave it primacy as a global system whose principal arena of expropriation and exploitation was Africa and showed that colonialism was the source, the true lifeblood of capitalism and not just a side effect. It represented a radical break with Marx’s theory of the origin of capitalism and the Euro-centrist theory of Marxism.

Chairman Omali also formed the theory of African Internationalism which posited that Africans in Africa and throughout the world constituted one African Nation, explaining that we have been colonized, enslaved and forcibly dispersed around the world by colonialism through its flesh-peddling slave-trade.

The theory also reinforces that Africa is the homeland and birthright of all Africans in the world and links the struggle of Africans all over into a single fight against colonial-capitalism. It asserts that the African Revolution must be waged on different fronts in Africa and throughout the African world, in the quest for absolute freedom and independence. Chairman Omali studied, embraced and continued the fight for a free and united Africa that had been fought for by Marcus Garvey, Kwame Nkrumah and Malcolm X.

Chairman Omali emerged as a leading theoretician, making a major contribution to our understanding of colonial- capitalism, the world economy and the urgency of revolution and socialism.

In 1976, Chairman Omali established the African People’s Solidarity Committee as an organization of white people who broke with their own colonial ruling class, committing national suicide to join in the struggle for African liberation and reparations for African people, under the leadership of the APSP. This was the first organization of its kind for colonizers to join in genuine solidarity with the struggle for Black Power, drawing a sharp line between the opportunist white left.

Chairman Omali also made reparations a household word for Africans in America and throughout the world. He organized the first World Tribunal for Reparations to African people in November 1982, which found U.S. guilty of the crimes of colonialism, slavery and genocide and set the debt owed to us at $4.1 trillion in unpaid labor alone. Through the 12 consecutive tribunals, he popularized the demand for reparations, a demand hotly debated today.

Despite the turmoil and terror experienced by our struggle for liberation, Chairman Omali has led the APSP and the Uhuru Movement in a new era of struggle against colonial-capitalism and exposed the deepening crisis of imperialism.

He’s been on the ground during uprisings and rebellions erupting in African colonies like Ferguson, to organize the African masses and channel their revolutionary energy and furor into the fight against colonialism and the struggle for liberation.

For 50 years, Chairman Omali has led the APSP in a relentless struggle against colonialism. He has been unwavering in his commitment to African Liberation. He has remained steadfast and unyielding in the quest for independence and the liberation of Africa and her sons and daughters in the African Diaspora from colonial-capitalism which has made us the wretched of the earth.

Chairman Omali is a revolutionary leader who adamantly opposes the colonial domination of Africans, who stands in solidarity with colonized and oppressed peoples around the world and their struggles for national liberation. He has told the truth about a world where the West is a parasite that lives off of the resources, riches, wealth and labor of Africa, Asia and the Americas and its peoples through the colonial mode of production.

For most of his life, Chairman Omali has been committed to the struggle to overthrow colonialism and to free Africa and all African people. He survived the counterinsurgency of the 1960s to continue the struggle to complete the African Revolution and achieve independence in our lifetime.

Neither arrests by the colonial authorities nor intimidation or terror by colonialism’s agents of repression have deterred him. The recent FBI raids on the APSP and the Uhuru Movement were designed to discredit Chairman Omali with false accusations of collusion with Russia, but his lifetime of struggle shows that he has been motivated by nothing but his opposition to colonialism and the cause of African Liberation, guided by African Internationalism and supported by the African masses and anti-colonial and anti-imperialist forces around the world who unite with Africans and support the African Revolution.

At 81 years old, Chairman Omali is the leader of the worldwide African Revolution and he will continue to lead it until Africa and Africans are free and this parasitic system of colonial-capitalism is overthrown and swept into the dustbin of history.

The colonial government’s attempts to neutralize Chairman Omali are 81 years too late. He has long since emerged as the greatest revolutionary leader of this era and he has spread African Internationalism and the message of the African Revolution throughout the world.

Under the leadership of Chairman Omali Yeshitela, the African Revolution will live until we liberate ourselves and victory is ours in the struggle against colonialism!

Hands Off the Uhuru Movement!