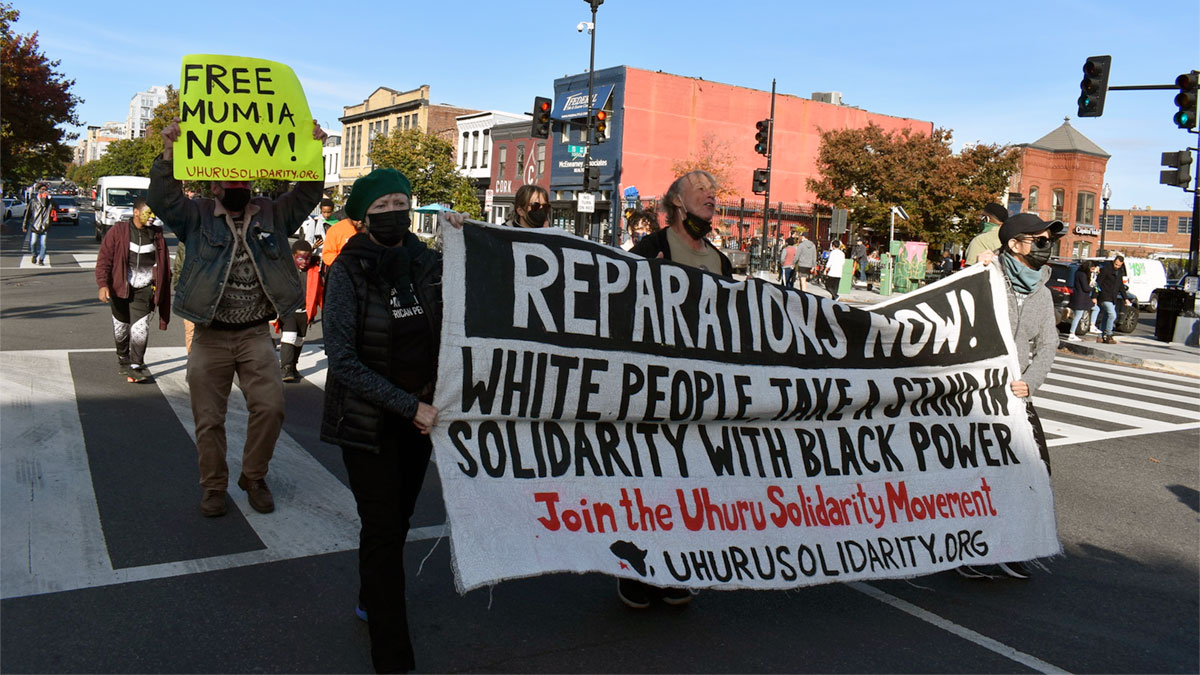 White solidarity with the Hands Off Uhuru Defense Campaign!

At 5 am on Friday, July 29, 2022, the African People’s Socialist Party Chairman Omali Yeshitela and Deputy Chair Ona Zené Yeshitela were already awake, sitting at the table in their North St. Louis home discussing plans for the day.

A training program would be held at the Uhuru House, where certified African birth assistants would train 14 local African women from the North St. Louis community to become doulas.

The doula training is one of the many facets of the Black Power Blueprint program, which includes a community basketball court, a farmers market and beautiful murals—programs to generate political and economic power in the hands of the African working class.

Suddenly the predawn quiet was pierced by loudspeakers announcing that the FBI was at the door and commanding them to come out with their hands up.

Before the Chairman and the Deputy Chair could respond, the FBI agents broke down the front door with a battering ram. Next, windows in the basement and back of their residence were shattered; the FBI threw flash-bang grenades into the house.

As Chairman Omali Yeshitela carefully walked down the stairs, the red laser sightings from numerous assault weapons were pointed at his chest. A similar situation happened in the final moments of the lives of many African leaders slain by the colonial State, such as Malcolm X, Fred Hampton, Martin Luther King, and 16-year-old Bobby Hutton, among many others. The Chairman was clear that one false move would give these cops the excuse to release rounds of ammunition.

On the porch, the Chairman was surrounded by scores of militarily armed FBI agents and police who had arrived in armored vehicles. As Ona Zené Yeshitela walked down following the Chairman, a drone brushed against her face on its way up the stairs.

At the same time—5 am Central and 6 am Eastern—in St. Louis and St. Petersburg, FL, two Uhuru Movement offices were violently raided, including the Party’s longtime headquarters, the St. Petersburg Uhuru House, the Uhuru Solidarity Center and the Party’s building in the white community of South St. Louis.

This was the first assault on the African Liberation Movement of this intensity since the ’60s, when the U.S. government’s counterinsurgency programs—including the infamous COINTELPRO—targeted African leaders, organizations and activists with mass imprisonment, assassinations, subversion, slander and destruction of organizations.

The July 2022 FBI raids produced no charges against any Uhuru Movement members until this time, but named four people as “unindicted co-conspirators” stemming from a bogus grand jury indictment of a Russian national who lives in Russia.

Chairman Omali Yeshitela and the African People’s Socialist Party were the targets of these violent raids. For over a half-century the Chairman has struggled relentlessly for nothing short of the total liberation of Africa and African people wherever they have been forcibly dispersed worldwide.

Long ago, the Chairman took it upon himself to solve the problems left unresolved from the African Revolution of the ‘60s, which had been militarily and politically defeated by counterinsurgency.

Over the years, the Chairman has courageously gone up against the prevailing headwinds, putting in place the disciplined Party organization needed to complete the Black Revolution.

The Chairman created African Internationalism, a scientific worldview that enables the African working class to understand how the world got to be the way it is and how to change it. The Chairman has always fought to take power and govern.

Through African Internationalism, everyone can comprehend that colonialism—the political and economic domination by foreign and alien States—is the central problem negatively affecting African people’s lives, not racism.

He has brilliantly defined the reality of the colonial mode of production, meaning that everything produced in this society requires colonialism. In other words, the combination of land stolen from the Indigenous people and an economy built on stolen labor from African people created a life for white people, the colonizers.

Finally the Chairman solved the problem of the relationship of white people to the African Revolution. As a result, in 1976, the Party put white people under its leadership in establishing the African People’s Solidarity Committee.

Thus it is significant that this time around, unlike in the 1960s, there was a strategically organized white front of the Party, mandated to “go behind enemy lines” to break the isolation of the African Revolution and to provide security as a second front.

In the 1960s, white people ran when the guns came out. They got a haircut, took a bath, and went back home to keep living on the pedestal, Chairman Omali has stated.

This time when the attack by the colonial State came down, the African Revolution was not alone, isolated and deserted by white people. In the ‘60s, as the counterinsurgency against African people deepened and African leaders’ body count grew, the resources dried up, as white people disappeared in droves.

This time under the Party’s leadership, a solidarity force has been calling for and actually winning reparations from white people for the revolutionary programs of the Party for more than 40 years.

For the first time, white people have an assigned role in the African Revolution, behind enemy lines, winning other white people to our genuine interests, our true class struggle led by the African working class fighting for African liberation and the liberation of all oppressed peoples of the world.

Now, under the Party’s leadership, instead of opportunism, self-interest and betrayal, we have a place and can take a dignified, principled stand in relationship to African people.

We are calling on white people in the U.S. and worldwide to come out and join the Black is Back Coalition’s March on the White House in support of the Hands Off Uhuru! Hands Off Africa! Campaign. Let’s have a massive contingent in solidarity in Washington DC, on November 5 and 6.

Go to blackisbackcoalition.org and register today!

FBI press conference Oct. 24 was an attack on the Uhuru Movement! Hands Off Uhuru! Hands Off Africa!

“They intended to kill us!” The Battle of St. Pete remembered

STL Aldermen to hold public hearing with FBI, police on raids on the Uhuru Movement