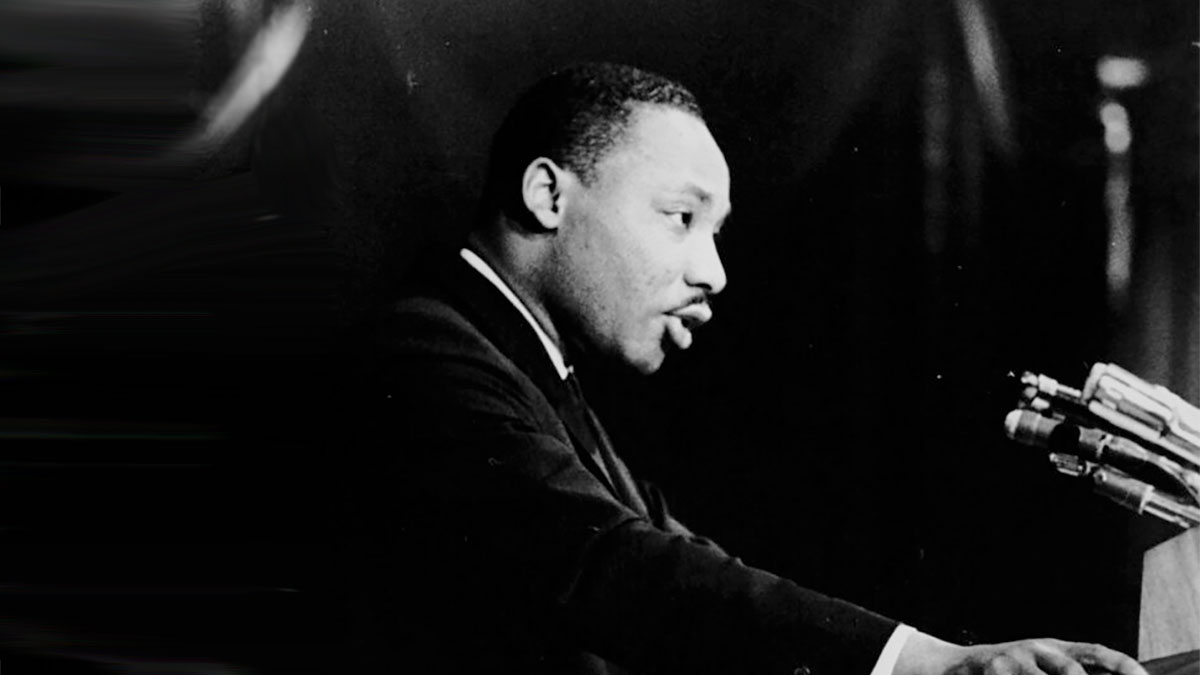 "Dr. Martin Luther King, Jr., speaking at an AFL-CIO event" by Kheel Center, Cornell University Library is licensed under CC BY 2.0. To view a copy of this license, visit https://creativecommons.org/licenses/by/2.0/?ref=openverse.

In 2022, the FBI launched a blatant assault on the African Liberation Movement with a multi-city raid on offices and homes of Uhuru Movement leaders, including 81-year-old Chairman Omali Yeshitela. The FBI accused them of serving as Russian pawns for charging the U.S. government of genocide against African people and running candidates for local office on a reparations platform. This article is the first in a series on the FBI’s 100-year history of surveilling, following, harassing, slandering, terrorizing, jailing and assassinating any African who stands for black freedom.

As we approach the celebration of Martin Luther King Jr.’s birthday, it’s important to remember that he was assassinated—particularly as part of the U.S. Federal Bureau of Investigation’s (FBI) program to discredit and destroy any organizations or leaders who could contribute to mobilizing African people to win freedom. And while the details of how his assassination was coordinated have still not been uncovered, the fact that the FBI targeted him for “neutralization” has become public knowledge through information obtained through the Freedom of Information Act.

Assassinated on April 4, 1968 at the age of 39, King was a significant leader during the Civil Rights Movement in the 1960s. Like many in leadership of the Civil Rights Movement, he adhered to the liberal African petty bourgeois tactic of philosophical nonviolence. He was an assimilationist who thought the way to create a better life for our people was integrating with our oppressors.

However, unlike most in the African petty bourgeois—or black middle class—leadership, King was forward thinking. He began to realize that the nonviolent approach was not working, and he began to question his ability to continue to call for nonviolent action in the face of the U.S. being what he called “the greatest purveyor of violence in the world today” in his “Beyond Vietnam” speech.

King also noticed the tides changing in the leadership and direction of the movement. The call for integration began giving way to the call for Black Power. Whereas the African petty bourgeois leaders used to call for marches bringing out masses of poor and working class Africans, the African working class began to mobilize marches and actions under its own leadership and call for African petty bourgeois leaders to show up. When King was killed in Memphis, he was there to attend a march organized by sanitation workers there.

By 1962, Martin Luther King, Jr. was one of the FBI’s targets. This targeting included bugging his office and other locations, investigating his bank accounts, putting paid informants in his organization, writing fake letters pretending to be him to contributors to his organization to scare them from donating and attempting to isolate him by enflaming tensions between him and other Civil Rights leaders.

The FBI also sent recordings of some of their bugging tapes to King and to his wife. Along with the tapes sent to King was a letter telling King he should commit suicide. Meanwhile, they kicked off a public smear campaign against him.

In 1968, an FBI memorandum announced a new counterintelligence program (COINTELPRO) to “prevent the coalition of militant black nationalist group… [and] prevent the rise of a black ‘messiah’ who would unify and electrify the militant black nationalist movement.” It further states, “King could be a very real contender for this position should he abandon his supposed ‘obedience’ to ‘white, liberal doctrines’ (nonviolence)…”

Later that year, as King continued to question his ability to call for nonviolence, he was assassinated.

There is no doubt that the FBI’s COINTELPRO led to King’s assassination, just as it’s clear that the COINTELPRO continued to target and assassinate our leaders and crush our Black Power Movement in the 1960s.

That COINTELPRO continues to target our leaders and organizations today—most recently with the July 29, 2022 FBI raids of African People’s Socialist Party (APSP) and Uhuru Movement offices and homes. The raids targeted leaders including APSP Chairman Omali Yeshitela, APSP Director of media and communications Akilé Anai, African People’s Solidarity Committee Charwoman Penny Hess and Uhuru Solidarity Movement Chair Jesse Nevel. Like in the 1960s with King, the State has accused them of being pawns of Russia.

We must oppose the continued war of counterinsurgency against our Black Power Movement and our leadership! No longer can this fragile, dying colonial capitalist system save itself from extinction by continuing to steal our labor and resources! No longer can it attack our leadership in attempts to hold back history! African people will be free.

Support the Hands Off Uhuru! Hands Off Africa! Defense Campaign!

Attend or organize an MLK Day event in your city – more info HERE.

Hands Off Uhuru! Hands Off Africa!

Hands Off Uhuru! Hands Off Africa! Everyone out to the November 5 Black People’s March on the White House

Hands Off the Uhuru Movement!